Dr Julie Gabriel, President of FISav and founder member of the GBSF, was awarded the prestigious honorific Gant d’Or, or Golden Glove, at Loverval in Belgium, by the European Confederation in October 2017. 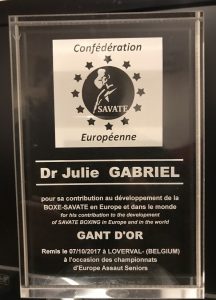 Very many congratulations from the GBSF!

Brighton Savate is absolutely delighted to be putting on an event for the first time on England’s south coast on APRIL 7th-8th 2018.

The event begins on Saturday with a set of seminars, in which numerous French and European Champion Savateurs from France will be coming over to share their skills; alongside a team of instructors including newly crowned world champions Romain Falendry and Amine Feddal from Tolouse Multi-Boxe, ABC La Rochelle head coach Vincent Lesieur and head coach of Toronto Savate,

Participation
– Athletes must meet one or more of the GB title eligibility requirements, these being:
1) hold a UK passport.
2) are a Permanent Resident of the UK.
3) have the legal right to live in the UK, currently live in the UK and have been a GBSF member for at least 6 months.

» Read more about: Regulations for the British Savate Assaut Championships 2019  »

Very many congratulations to James Southwood on gaining his GAT1 (first degree silver glove) at a grading in France this summer, making him only the second GBSF memer ever to do so.
– Dr. Laura Gilbert, GBSF President

Options:
£25 no grading
£40 including grading

Read the GBSF newsletter to meet our new Club Instructor, Sam Byford-Winter and get an update on recent events.

Got something interesting to contribute to the next newsletter or GBSF news? Submit articles to newsletter @ savate.org.uk

Results of the 2017 British Savate Assaut Championships, held on the 6th May in Farncombe, Surrey.

Thanks to Guildford Savate for hosting us,

Read the GBSF newsletter  to see your representatives on the Executive committee, elected at the November AGM, hear about the exciting new Head of Media and Technology and learn about our keyword for 2017: ‘Outreach’.

The World Assaut Championships and the World Canne de Combat Championships took place in Varaždin (Croatia) in September 2016. Athletes from 40 countries and 4 continents, including 6 athletes representing Team GB (one of who represented in both Savate Assaut and Canne de Combat), attended the biggest Savate Championships to date! Team GB sent a successful team, returning with 1 silver and 3 bronze medals. A great job from all of our fighters!

Congratulations go to all the team:

Congratulations to the Champions:

And congratulations for the best fight of the day: James Antill/Nicholas Gowron

Thank you to all of our competitors,