In January, the Hungarian Savate Federation welcomed over 130 fighters from across Europe to the VII. Budapest Savate Open.  Junior, cadet and senior fighters from 11 countries – including Finland, Greece, Great Britain and Serbia – gathered in the Hungarian capital’s Beast Arena for a day of 100+ tournament bouts to truly kick off 2019 in style.

Morgan Alexander (Cambridge Savate) represented Great Britain valiantly in Paris this September as the first ever British Savate Combat European Championship finalist. Less than one month later, Morgan reappeared in the ring to challenge for the World Assaut title and came home with the Bronze medal. An inspiration to all Savate fighters that being at the top of the game (in both Combat and Assaut) is possible! 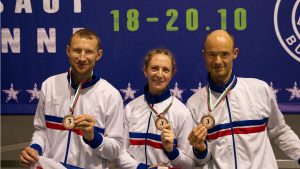 Six fighters, 1 coach and 4 officials represented Great Britain at the World Savate Assaut Championships 2018 as part of the biggest competition to date. Three days of fighting saw over 200 athletes from 42 countries compete to see who would be crowned World Champion 2018. Our fighters fought hard, drawing some of the top Savate nations in the World to move through their pools and into quarter and semi-finals.

On 6-7th October 2017, nine British athletes (3 women, 6 men) travelled to Loverval, Belgium, to test their ability against the best fighters from across Europe. Accompanied by world-renowned judge/referee Jasbir NAGI, the Team GB presence at the competition was one of skill and success.

Four bronze medals were won, and all athletes fought fantastically, showing off their true talent in the ring!

Team member Ally Sinyard reports on her experience at her first European Championships:

“When friends and family ask me how I got on at the Euros,

James Southwood reports:
In the first week of July 2017, it was my privilege to attend a week-long seminar – or stage – in Boulouris, on the Cote d’Azur, organised by the International, European, and French Federations of Savate.

If it seems paradisaical to be enjoying a wide view of the Mediterranean on a pine-scented hill, under blue skies and palm fronds, then we agree so far; add to this twice-daily technical instruction from several of the World’s finest Savate coaches,

In November, Savate Ireland welcomed members of London Savate, Oxford Savate, City Combat and Dorset Savate for the latest instalment of the Irish Savate Open. Once more, it was a warm and welcoming event with a great seminar on the Friday night followed by junior and senior fights filling the Saturday. There were 100 entries, from 4-year old novices to senior World Champions – a veritable feast of competitive engagement in a friendly atmosphere!

The first Viking Cup was held over the weekend of 7th/8th May 2016. The event was hosted by Cambridge Academy at St Bedes Sportshall. Four Viking countries participated: Finland, Germany, Great Britain and Ireland, including members of nine different clubs.

The weekend started with a course for the officials taught by Alain Gernet, visiting from France. Athletes were also invited to participate to help their understanding of what judges look for in competition.

The amusingly titled ‘Titi Parisiennes’ is not as one may imagine a continental branch of Ann Summers, but in fact the best Canne de Combat competition in the World. Held annually by the famous Apache de Paname Club of the 13th Arrondisment in Paris, it is a team event with 3-4 fighters per team.

Three fighters from Great Britain attended the Bulgarian World Open in Kranevo, near Varna, in August 2014.

The sun, sea and sand certainly helped the competition to have a relaxed feel, with a poolside boxing ring to fight in! This was definitely a competition to remember and once more our athletes returned having met new people from a variety of countries and re-connected with international friends.

This year Great Britain was represented at the European Savate Combat Championships in Bugeat, France on June 13th and 14th. Sian-Marie Clark, fighting under 56kg, has been on the GB Assaut team since 2010 and decided this year to turn her hand (or, more appropriately, fist) to Combat Savate, the full contact side of the sport.

After an intense 3 months of training and an early morning flight into Limoges, Sian and her coach,