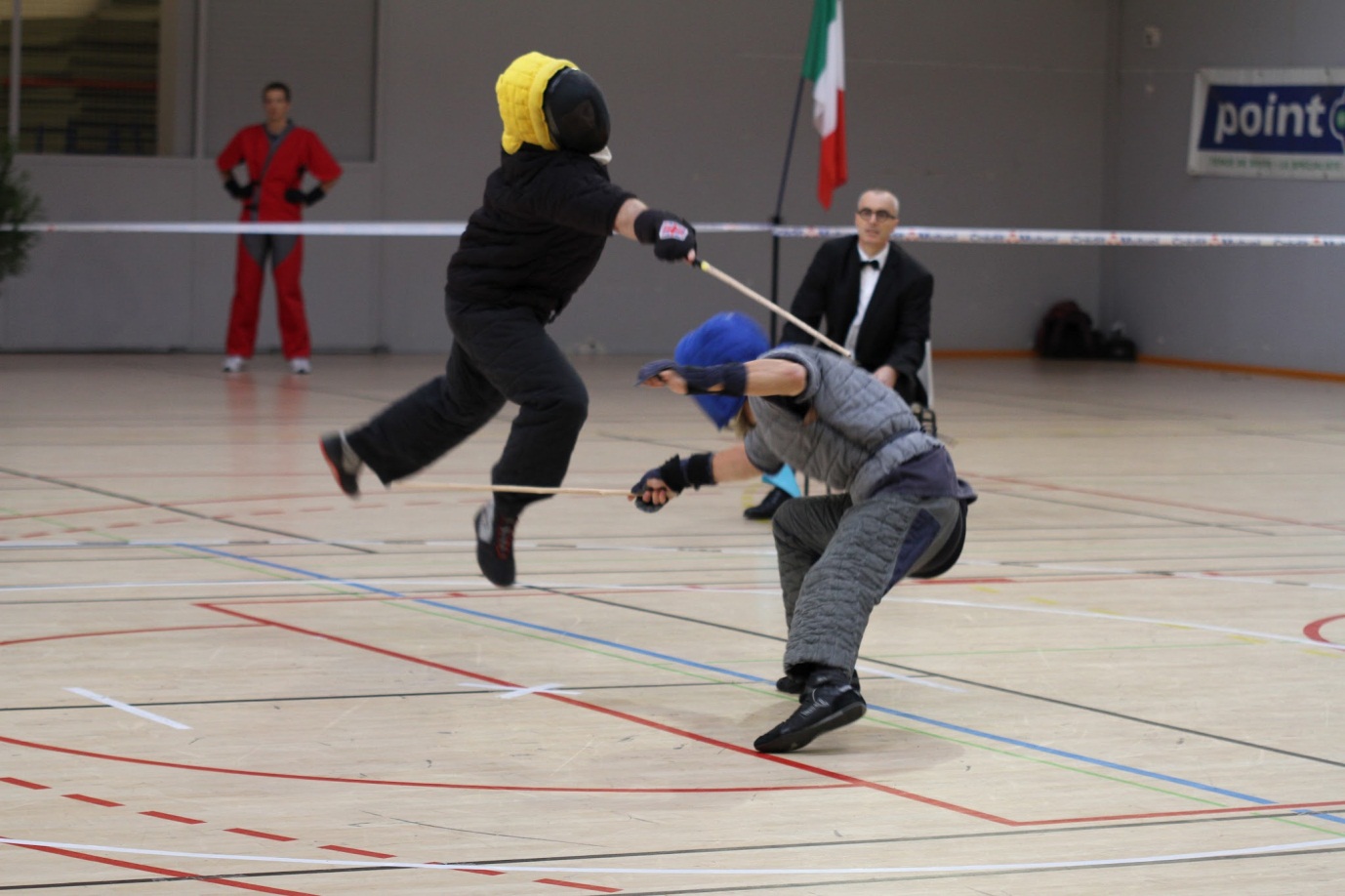 At the ungodly hour of 5.30am Morgan Alexander (Mogs) and I caught the first of several trains from Cambridge for Nante, in the Loire Region of France.

Following an uneventful journey to Paris we continued to Nante by TGV and arrived about 14.30 hrs, to be greeted at the station by one of the organisers, a guy from the St Herbelain Savate and Canne Club in Nante. A 20 min drive took us past the gymnasium where the completion was to be held and to the Hotel Ibis where the fighters were stabled. The rest of the team would not be arriving until later in the evening, so Mogs and I went down to check out the Gym and meet up with other Cannists.

A short tram ride led us to a huge and very modern gym, with great facilities and two fighting rings, and a crowd of excited and friendly tireurs or cane fighters.
The Cane fighting community is unusual in that it is very harmonious with little of the clash of egos seen in some martial arts events. Fighters are happy to help each other and the general feeling is of one big family.

For those unfamiliar with Canne de Combat, we fight in 9m diameter rings for 1.5 min rounds, padded suit and fencing masks are obligatory as we fight full speed and full contact with 95cm solid chestnut canes (about the size of a small pool cue).

There are six codified strikes, plus leg strikes, and strikes are delivered to the face, flank and legs, for more info see the Wikipedia entry.

After catching up with old friends and acquaintances, we headed back to the hotel and met up with the rest of the team, returning to the Gym to enjoy the draw for the fighting pool and a few glasses of the fantastic local Gamay and Muscadet (both the excellent 2010 vintage).

Let me briefly digress to remark on the generosity of the welcome by the local organisers, our hosts headed by the affable Armel du Chesney could not have been more hospitable. For the competition fee of 120 Euros we got 3 nights’ accommodation, with all our meals thrown in. The lunch and dinner were cooked by the organisers families from local market ingredients with wine at our evening meal, a display of hospitality which helped to make us all feel very welcome and part of the St Herbelain Canne family.

One thing that was immediately apparent was that the standard of competition by the International fighters had improved dramatically since the European Championships in Cambridge, UK. All of our initial fights were very hard, personally I drew Benjamin Latt for my first fight, twice World Champion he delivered a stunning exposition of how the beat an opponent and over three 90 second rounds I only got in a couple of scoring hits to his tens of strikes. His delivery was blistering and by the time I had seen he was arming a strike he had dropped and hit my leg!

My other fights proved as fruitless (although with some very close points decisions), however the rest of the team fared a little better and several improved over the course of the day, each scoring enough points to fight in the elimination bouts the following day. Day two saw more improvements in fighting with Stuart, Merlin and Morgan all putting in some great technical fights, and unfortunately losing by narrow margins. Morgan’s bout against the very experience Marie Guadin of Reunion was particularly close and an excellent fight to watch, and can be viewed on YouTube

None of us was surprised that we hadn’t made it through to the finals and after a short break where we saw great demonstration of Savate Assualt and Cane Defence, we settled down to watch a masterclass in Canne de Combat.

The men’s finals were and all French affair between Bejamin Latt from Strasbourg and David Lebelle of La Reunion, a very close match won with a flurry of strikes in the second round by Benjamin Latt.
The ladies’ finals were between Celinie Claudin of France and Jerca Primc of Slovenia. This turned out to be a fantastic fight and a true expression of what Canne de Combat can be, no egos, no attitude just two relaxed, talented fighters expressing themselves.
Footage of many of the fights can be seen on YouTube, including the finals: Male Finals and Female Finals.

and some nice montages of the competition: Montage 1 and Montage 2.

A full set of results is given at www.championnat-monde-canne-combat-2012.com

Team scoring was based on the total number of points achieved by each team irrespective of number, this meant that men’s team came fifth, but unfortunately the ladies team with only Morgan in it came last even though she scored a higher individual place than any of the men!

Although not competing, special mention should be made of Agnes Aubert who not only acted as a time keeper, but as a translator for the organising committee and kept us all informed of the subtleties of the rules; without her help the trip would have been a lot harder and without her company less enjoyable.

The event was rounded off with the prize ceremony, and we were delighted that as usual in Canne events we each received an engraved cane to keep as a memento. This was followed by a great meal for all the teams and a lot more drinking and socializing.

In conclusion, the whole event was a great experience for the UK squad, we learnt a huge amount, we met and socialised with Cannists from all around the globe, met old friends, formed new friendships and drank a lot of beer and wine!

For more information on training or competing in Canne de Combat in the UK, please contact the GBSF Canne Commission on canne@savate.org.uk.