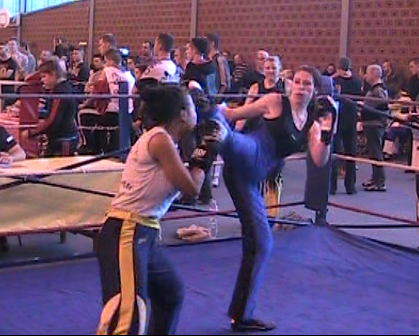 Six fighters from the GBSF competed in the Coup D’Opale in Calais on the 3rd November 2012. All won Assaut matches on the day and enjoyed the junior matches and Combats on show in the same meeting.

This is the second time fighters from GBSF have been invited to Calais by Philppe Suisse to participate in the gala known as the Coupe D’Opale. On this occasion we all won bouts and were impressed by the overall spirit and sporting atmosphere of the event, if not the Calais road system that surrounds it. The gala began with matches that were arbitrated and fought by juniors, which provided not only entertainment but an insight into the French method for the preparation of – doubtless – future champions.. As afternoon rolled on the adult assauts started and business commenced. Come evening we were able to relax and watch some of the Combat matches on show.

Veteran fighter and coach Martin Ross provided moral support and his customary deep knowledge of cornering and coaching, plus an ability to navigate through Calais backstreets and talk to the locals, all of which skills we taxed to the fullest.

James Antill was up first, scoring head shots off his opponent at will, encountering some difficulty with illegal strikes being thrown in return, but ultimately cruising to a comfortable win.

Sian-Marie Clark was the only fighter to have two bouts. Both were against considerably heavier opponents and while she put up an impressive fight, the first was too strong for her. Her second opponent succumbed to Sian’s chasse median and well-exploited range advantage to secure another British win.

Michael Grove, although a junior, fought in a lively encounter with a senior fighter. Michael was the first to score with two chasses to the head. Both fighters pressed hard come the third round and, in a close decision, Michael was awarded the win.

James Southwood: I won my fight against an opponent with a strong chasse that did not abate as the rounds went on, forcing me to find a higher gear to secure the decision.

Veteran Charlie Howes had to shake off an early good start from his experienced opponent, using his full range of strikes and speed to pull off a very well-admired victory.

Rachel Shore was scheduled to fight in the combat session in the evening, but alas her opponent had to pull out. Substituting an opponent in assaut, Rachel fought a fast-paced match, ultimately pulling away in the second and third rounds to win, employing an impressive variety of technique on the way.

We’ll be back next year Philippe!