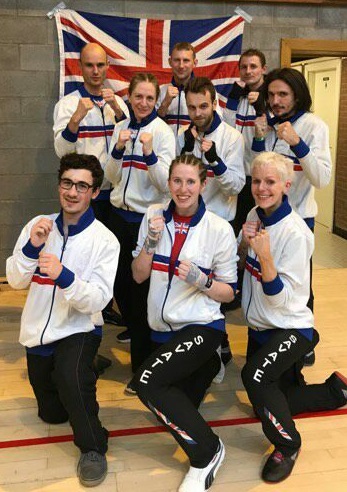 On 6-7th October 2017, nine British athletes (3 women, 6 men) travelled to Loverval, Belgium, to test their ability against the best fighters from across Europe. Accompanied by world-renowned judge/referee Jasbir NAGI, the Team GB presence at the competition was one of skill and success.

Four bronze medals were won, and all athletes fought fantastically, showing off their true talent in the ring!

Team member Ally Sinyard reports on her experience at her first European Championships:

“When friends and family ask me how I got on at the Euros, the first thing I talk about isn’t the fights. It’s the canteen.

And not just because I’d been cutting weight for two months.

“Think of a high school cafeteria but, instead of cliques, you’ve got countries,” I tell them. On one side, you’ve got the Finns, relaxed and deep in conversation. Then you’ve got the Italians, looking less than impressed with their pasta. And then you’ve got us, Team GB and, yes, at least three cups of tea are on the table.

For me, meeting fighters from different countries and all coming together for one weekend of fights, fun, canteen food and friendship was the proper highlight. And why I keep coming back for more competitions! As for how I got on, I lost both my fights but I couldn’t be happier with how they went. They were both split decisions which, considering it was my first international tournament, was a far better outcome than I’d expected anyway. The only injury I received was a sore back from falling down the stairs at the afterparty – and even that I’ll look back at with fond memories!”

Congratulations to all the athletes, and thanks to the organisers, officials, coaches and supporters who work tirelessly to make these competitions a success!