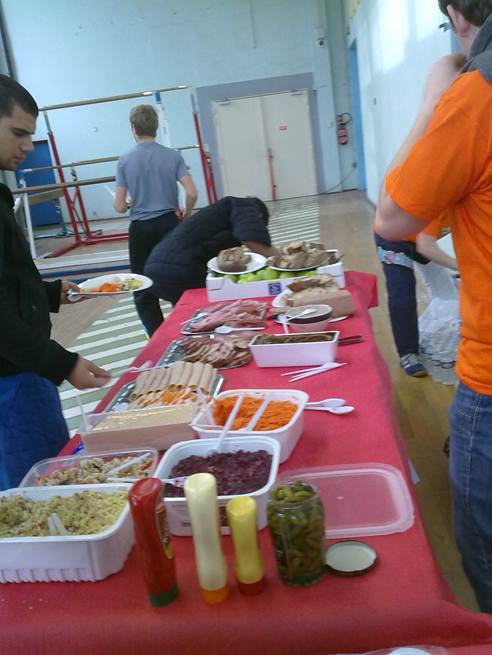 Friday 28th January saw four cannists from Cambridge Academy of Martial Arts (CAMA) just make the train on the first leg of the journey to take part in the Tournois des Titis Parisiens 2012.

After a decent travel, and having dropped kit off at their hotel, Julie Gabriel, Morgan Alexander, Stuart McIntyre and Merlin Hartley took a stroll to locate the Louis Lumière gymnasium where the event was to take place.

A gym, one startled Glennys Verone, and a Chinese meal later, all were tucked up ready for the competition the next day.

The Tournois des Titis Parisiens is a team competition in the sport of Canne de Combat. First organised in 2005 by the then President of Savate in Paris, Yonnel Kurtz, the event has attracted many teams (usually comprised of 3 fighters) from various countries over the years. Participants enjoy a relaxed atmosphere where experts and novices come together to fight, mark, judge and referee themselves through the weekend.

The bout lasts for six back-to-back rounds of one minute each. After the teams have saluted in one fighter from each stays in and the first round begins. After one minute of mostly uninterrupted play, a whistle sounds and the fighters opt to either stay in or ‘tag’ a team-mate in to the ring. Fighters are allowed to stay in for a maximum of two consecutive minutes. Once the bout is finished and the results announced the teams take their places as officials.

This year’s tournament was organised by Julien Falconnet and Philippe Breucker with support from a number of familiar faces including Sélénia Claudin-Mabire, winner of the European Championships hosted in Cambridge in 2010.

Saturday brought many fights for all teams with CAMA winning their bout against Les Padawans d’Ermont early in the day. Team Sud proved more troublesome, but then going up against 2010 European Champion Florian Adami is no easy task. Lunch was laid on in traditional French competition style and although nothing was arranged for the evening, all found a place to relax. Sunday saw more fights with the Cambridge crew enjoying challenge bouts with the Duck Team and La Rose Couverte de Paname as well as the arranged fights and playoffs. With goodbyes said and a lot of experience (and cheese) gained the Team made their way safely back to Cambridge ready for training the next day.